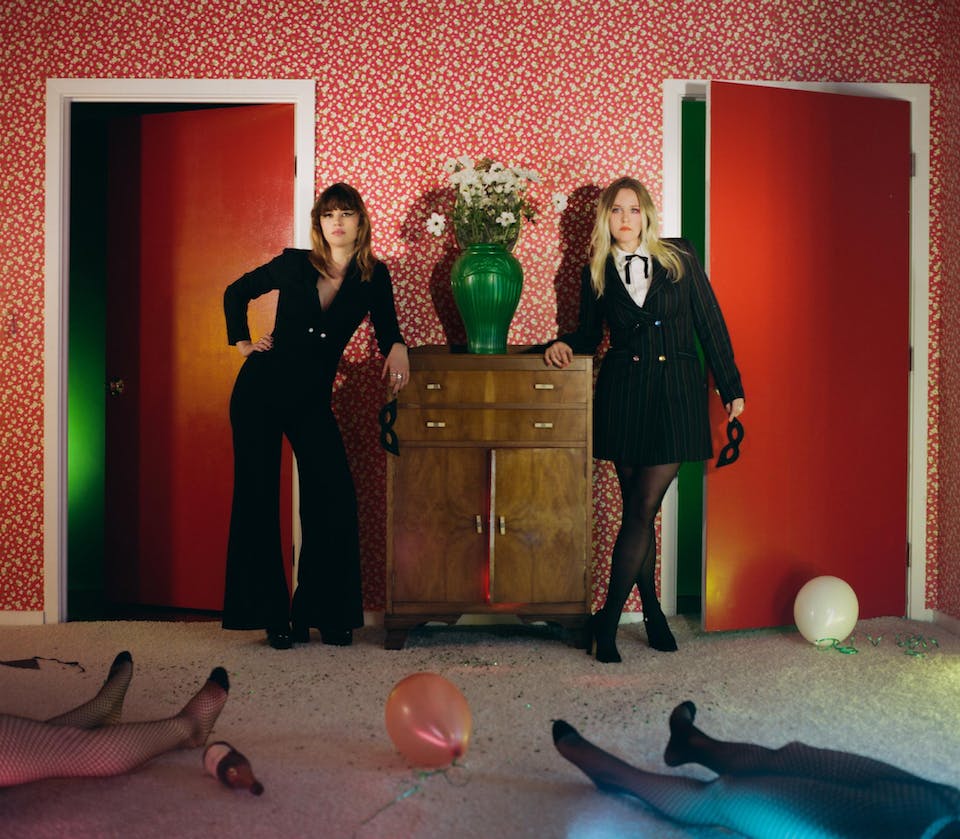 "Don’t you think you’ve had enough?” is a sharp reprimand, a gentle chiding; it trails from a parental rebuke during childhood sweetness to coming from concerned friends during adolescent recklessness. Or, in Bleached’s case, it’s what Jennifer Clavin asked herself when she hit a turning point in her life.

Don’t You Think You’ve Had Enough?, the new record from Bleached, is Jessie and Jennifer Clavin’s first LP written from a place of sobriety. That newfound and clear-eyed perspective serves as the guiding force in every corner of its sound, yielding a courageous, honest, and sonically ambitious album. Here, the Clavins radiate the power and bravery of facing addiction, of letting go of the past and becoming open to a radically different future of self-love, acceptance, and newfound honesty. It’s a record about fighting both literally and figuratively for your life -- and the clarity that’s born from that struggle.

“Drinking was really the only way I knew how to get through fear in those moments before sobriety,” Jessie explains. “As I was writing, and learning these new tools, I realized sobriety is so much more than not having a drink. It really hit me during the creation of this record.”

“Writing these songs while sober became somewhat of a spiritual experience,” Jennifer says. “Like I was connecting with a power greater than myself. I had to let go, trust the process, and allow an energy beyond my control to be present.”

The writing for Don’t You Think You’ve Had Enough? began in early 2018, as both a daily process in a Los Angeles practice space, and with friends and co-writers in Nashville. It marks the first time the Clavin sisters approached writing a record with a set, regimented schedule. It also marks the first record the Clavins wrote while fully harnessing the power of creating art from a place of authentic happiness.

“Looking at it as more of a piece of art rather than a chunk of my diary made it a different experience,” Jennifer says. “I felt free to experiment, let go, and have less control over what was happening with the demos, which ended up being a blessing because I got to go places with the melodies I wouldn’t have normally gone.”

Producer Shane Stoneback (Vampire Weekend, Sleigh Bells) also helped to open every door to experimentation while recording the record, wanting to be exploratory while keeping the sound singularly Bleached. The resulting LP is an explosive record grappling with the past; its twelve tracks mark some of the sisters’ most visceral, rawest songwriting to date -- and some of their best. Don’t You Think You’ve Had Enough? revisits the same lives led on 2016’s Welcome the Worms and debut Ride Your Heart, but with maturity. Bleached’s melodies have always been center-stage, but Don’t You Think You’ve Had Enough? glimmers with inspiration found in touring with the likes of The Damned and Paramore. That arena-ready pop, incisively catchy, was a palpable influence, helping to push Bleached’s sound in a new direction.

“We were trying to stay away from expectations -- from premeditated disappointments -- and trying to make it come naturally,” Jessie says.

Don’t You Think You’ve Had Enough? had the Clavins returning to a recording process similar to that of their first 7-inches - with Jessie handling the bulk of the instrumentation and Jennifer handling the lyrics and melodies. It was important to the Clavins that the entire record return to their dynamic as sisters.

Sometimes, Jessie would go into the practice space first to lay down guitars and instrumentals with Jennifer going in the next day to find a new GarageBand file waiting for her, opening it -sounds unheard- and writing her lyrics and melodies. A constant push-and-pull of surprises as well as a collision of musical liberation and inspiration, the process opened up a playfulness, yielding tracks like “Kiss You Goodbye” and the disco punk inspired first single “Hard To Kill” which, as Jennifer puts it, is about “staring down the road towards death, realizing I needed to wake up and get out of my selfish patterns of self destruction”. Sonically this process also helped shape new ideas for songs like “Daydream,” a track about finding it hard to let go of the past and feeling stuck in a fantasy life, and “Silly Girl,” a track about severing friendships because of the role drugs and alcohol played in them.

Album closer “Shitty Ballet” is the first studio work from the Clavins relying so heavily on acoustic guitars, but the striking emotion of the demo stuck, and they stayed true to it. It was written in just a few hours in a deluge of heartbreak. Thematically, the track feels like bridging the gap between Welcome the Worms and Don’t You Think You’ve Had Enough?, a proper break-up with both a relationship and a past life.

“With this album I feel like I finally have a relationship with myself, which I didn’t have during Welcome the Worms. I didn’t even know myself. And the person I was, I didn’t like,” Jennifer explains. “A lot of this record is coming from a place of self-love and realizing that this is part of my history, this doesn’t make me who I am, but I can talk about it and let it go and realize I don’t have to do that anymore. I don’t have to have these unhealthy relationships anymore, whether they’re romantic or otherwise. I don’t have to treat myself like shit anymore. I actually like myself now.”

Dude York's Sincerely opens with a blast—the massive opening chords of "Black Jack," a squealing track that blends the swagger of glam with the heavy riffing and ringing hooks of arena rock. The Seattle-based trio—Peter Richards on guitar and vocals, Claire England on bass and vocals, and Andrew Hall on drums—is announcing itself with an album that couches its themes of anxiety and eroding mental health in rock tracks that amp up the sweetly melodic crunch of powerpop with massive distortion and bashed-to-heck drums. Sincerely is a loud, sweaty rebuke to those moments in life when it seems like nothing's working, a testament to the power of friendship, staring problems directly in the face, and finding solace in art.

Richards, England, and Hall have been through a lot during their four years of playing together, and tracks like the speedy, dark "Paralyzed," the Creedence-echoing "Twin Moons," and the frustrated yet ebullient "Something in The Way" combines lyrics that play on the trio's travails with jumpy, riff-heavy distorto-pop. England handles lead vocal duties on the zinging kiss-off "Tonight" and the slowly grinding "Love Is," the first time she's done so on a Dude York record. "Times Not on My Side," an intimate farewell note sung atop jangling acoustic, caps the album.

A first pass at a home-recorded version of Sincerely led to the band being told that there was "drywall in every piece of [the record]," says Hall, and they had to go back to the drawing board. Longtime Sleater-Kinney and Bikini Kill producer John Goodmanson and JR Slayer (aka The Blood Brothers’ Cody Votolato) helped Dude York craft a record that captured the energy of their live show while finding new ways to expand upon its ideas.

"I feel like it's about losing perspective—a spiraling-inward perspective despite what may be ready support networks around you," adds Richards. "It's like, 'I don't need anybody's help. I should be able to do this myself, because it's just, like, living.'"

Bringing England's straightforward drawl into the mix underscores that idea, and its contrast to Richards' excited yelp heightens the tension on Sincerely, a chaotic, yet ultimately triumphant album that's a vital tonic for these increasingly confused times.

"Your back's against the wall," says Richards, "so all you can do is fight." 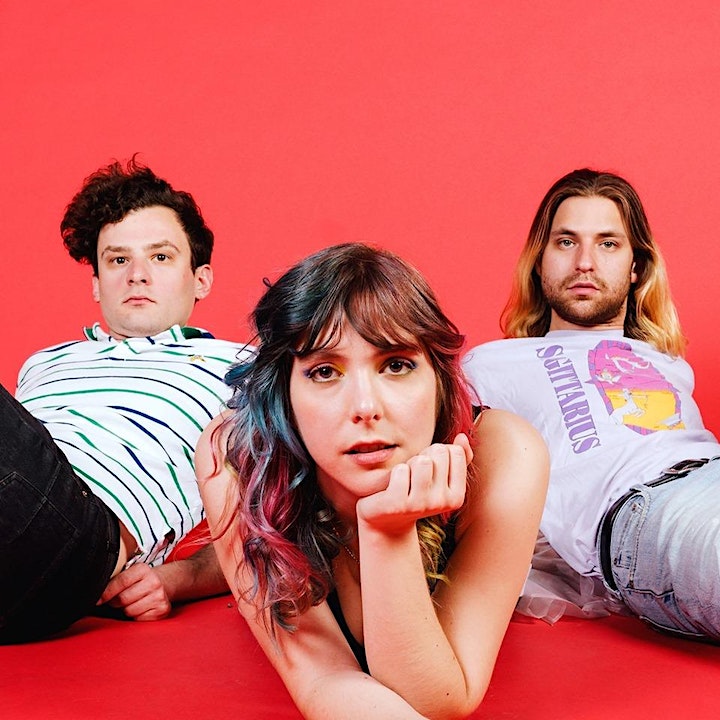 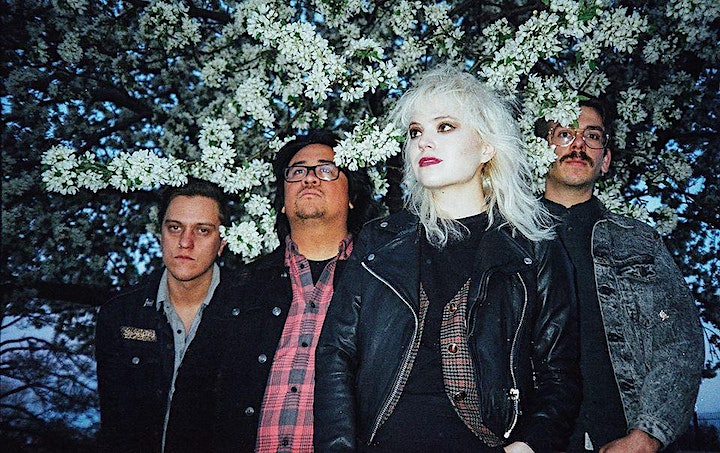 Based in Denver and primarily influenced by 2000s indie rock, Pout House staggers along the line of garage pop with a punk flair. Pout House self-released The Nancy Demos in February 2018 and a two-song single release titled Cosmopolitan via Denver label, GROUPHUG, in December 2018. The band boasts two tours, one west coast and one midwest, under their snug leather belts with plans for more.